The Shingon-school is one of the main Buddhist schools within the Japanese Buddhist tradition. It was established in the first half of the 9th century by the Buddhist master Kūkai, posthumously known as Kōbō Daishi or “Great Teacher for Spreading the Buddhist Teachings.” 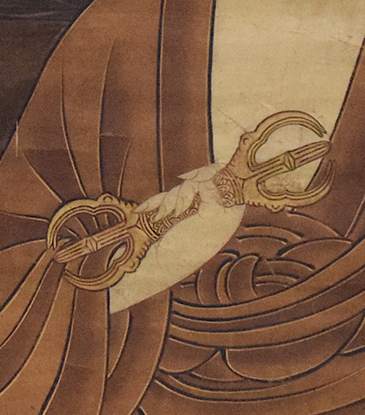 Kūkai was born into a family of lower landed gentry on the island Shikoku. As a gifted student he was sent by his family to the Confucian State University. After some fruitful years of study however, the young Kūkai faced a deep crisis of identity, being lost in between the lofty aristocratic world of learning and the harsh transient reality of everyday life. The scholarly environment of Confucianism was not able to give him the inner peace of mind he was looking for. Going against the wishes of his family and fellow-students, he left university, starting a life of wandering. He became a ‘self-declared monk’ and for the next ten years he devoted himself to the practice of the Buddhist path. This all happened in solitude and anonymity, away from the great Buddhist monasteries of his time, finding shelter in the serenity of Japanese nature.

Only after ten years Kūkai reappears in public life. He is chosen as a member of an official envoy to the Chinese court and heads for China. In the capital of the T’ang-dynasty, Chang-an, he meets his Buddhist Master Hui-kuo. Master Hui-kuo recognizes Kūkai as a suitable successor, and gives him full initiation into the tradition of the “teachings of truth-words” (Jap. Shingon). This tradition had its roots in Indian tantric Buddhism of the 7th century and had for the past two centuries become extremely popular with the Chinese imperial court.

After the passing away of his Buddhist master Kūkai returns after two years to Japan, with the goal of establishing the Shingon-tradition. This is done by the construction of two great centres of practice: the Kyō-ō-Gogokuji temple in the capital Heiankyō (the present Tōji-temple in Kyōto) and the Kongōbuji-temple at Kōyasan (present day Wakayama-prefecture). The former was established to pray for the welfare of the Japanese nation and remained at the center of culture and civilization. The latter was hidden deep in the mountains of the Ki’i region, and designed to be a training ground for practice and meditation.

Simultaneously with the establishment of these two great centres, Kūkai dedicates his further life to elucidating the teachings of the Shingon-school in a great number of philosophical works, letters and poems.

His mastery of Buddhist thought and wisdom reached legendary proportions even during his lifetime. In numerous tales and legends he is revered widely a great Buddhist saint and master, a prolific artist, poet and calligrapher and an able architect. His spiritual energy and boundless compassion finally seems to have crystallized on Kōyasan. It is here that Kūkai passes away in eternal meditation, perfuming the surrounding forest and mountains with his presence. After twelve centuries his presence still remains vibrant to this present day. Kōyasan still is the principal seat of the Shingon-school and one of the most important holy sites of pilgrimage. In modern times, its enormous historical value and deep spirituality was recognized by the Unesco, making Kōyasan and the surrounding mountains and pilgrimage trails part of the World Heritage.